Spring has sprung! And this flavorful green risotto brings delicious ingredients from the garden to the table with less than 10 ingredients.

Planning dinner isn't so hard when you have so many great veggies from the garden to use. Risotto is a nice break from the the typical meals you've been having the last few weeks. It takes less than an hour to make, so don't worry that you'll be standing over the stove forever. There's definitely some stirring involved, but it's a great way to get kids involved with dinner prep!

This isn't your typical Parmesan risotto. I add baby spinach and snow peas, then finish the dish with some tangy goat cheese. The snow peas add an unexpected, and pleasant crunch to the dish. The spinach gives it a rich green color and is packed with nutrients.

Make sure to use low-sodium chicken broth when making risotto. Regular broth makes the risotto unpleasantly salty in flavor! It's not only a great way to reduce sodium in your diet, but good for control of the recipe. I've added my own salt in the amount I want.

Spring green risotto is easy, so don't be intimidated. The trick is following the recipe, as well as being patient while you add the broth, a little at a time. As the arborio rice absorbs the broth it releases some of the starch. The starch creates the creamy texture risotto has. But left to cook with all of the broth, it would turn into a gloppy mess. Stirring and adding the warm broth a little at a time controls the release of that starch. 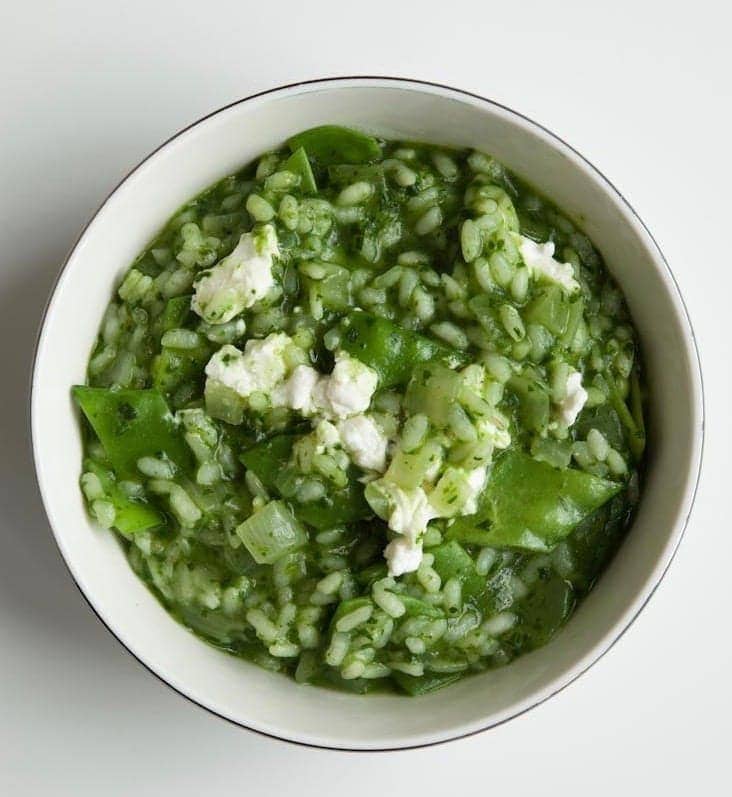 Make sure to use low-sodium chicken broth when making risotto.

Plan more family-friendly recipes. I like roasted chicken with my Classic Pesto dolloped right on top and some potatoes on the side. Or easy Corn Chorizo Tacos with some Mexican rice and salsa. You're halfway through the week!