Alfredo Veggie Stromboli made with grab-and-go grocery store staples is easy to put together, and even easier to eat for dinner - Delicious!

Frozen pizza dough is a miracle. I love it so much. I typically keep it around for "leftover night" dinner. I roll it out, add some sauce, pesto or something else, top it with chopped up whatever-is-in-the-fridge and cover it with cheese. It's one of my freezer staples.

I decided to mix it up and make stromboli. It's like pizza-stuffed bread! Your entire dinner is wrapped up in dough and baked to perfection. I loaded it with veggies for a meatless meal and used a seasoned cream cheese instead of sauce.

Prepping all the veggies can take some time, so I streamlined the process and bought pre-sliced mushrooms, already shredded cheese and canned artichokes so I didn't have to thaw them. My favorite, frozen pizza dough, makes dinner come together in only a few minutes. Leave it in the oven for a while and serve. Everyone is happy.

The recipe makes two stromboli, so half it if you aren't serving a crowd. It disappears pretty fast though, so you may want the full recipe. Alfredo Veggie Stromboli for the win!

I love the tangy flavor from the sun-dried tomatoes and the herby cream cheese. The cream cheese mixed with melty shredded cheese makes the most perfect alfredo sauce once baked together in the oven.

I used canned artichokes because they are processed with water. The jarred type is marinated in oil and seasoning and I find them too salty and overpowering. 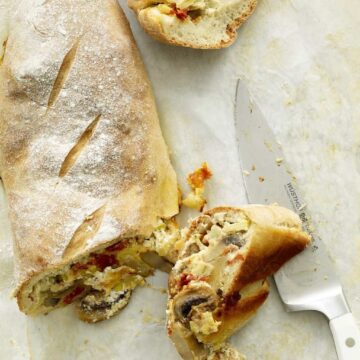 The recipe makes two stromboli, so half it if you aren't serving a crowd. It disappears pretty fast though, so you may want the full recipe.

Calories: 500kcalFat: 17.5g
Want to watch videos to show you how to cook?Check out our Youtube and try this recipe and more.

Get everyone to the table in a flash with more easy dinners like my Shriveled Ogre Nose Pizza. It uses frozen pizza dough too, and is topped with roasted veggies and ricotta. Whip up Corn Chorizo Tacos in a flash for a Mexican-inspired night. Happy cooking!