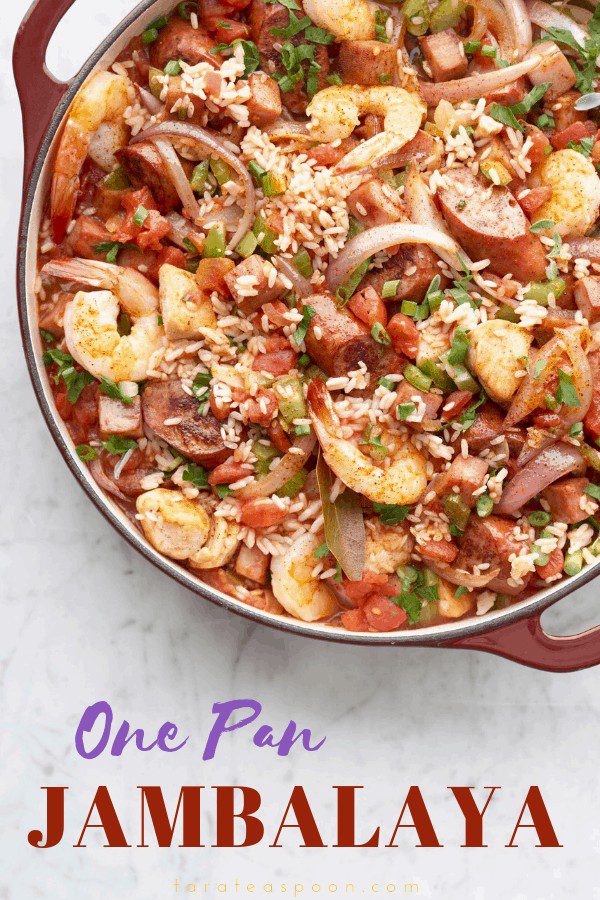 One pan Jambalaya is classic Creole cuisine. Make it your way for an easy meal everyone will love.

With some Cajun seasoning, the holy trinity of Louisiana, chicken, sausage and shellfish, you can enjoy this classic Creole dinner in about an hour and a half. Plus, you finish it in the oven for perfectly cooked stew. Serve it with some crusty bread and your table will be full of more happiness than you know what to do with.

This thick stew of rice, meats, tomatoes and tons of flavor hales from Louisiana, with Spanish and French influence. It's similar to Gumbo in it's ingredients, but Gumbo has file powder and okra. It's served over rice instead of having the rice mixed in.

Cooking Jambalaya in a covered dutch oven on the stove and in the oven makes for perfectly cooked shrimp and rice.

Jambalaya gets it's layers of flavor starting with the culinary holy trinity (celery, onions and bell peppers). That's what they call those basic flavors in Creole cooking. Tomatoes and Cajun seasoning intensify the stew. The deliciousness gets deeper with chicken, sausage and shrimp for the win.

Here's where I say have some fun. Add multi-colors of bell peppers instead of just green. Traditionally you include ham, sausage, chicken and shrimp. Wowza! I used kielbasa. I think it has a great rich flavor. Most people use smoked andouille which is heavenly. That's a great option.

On to the seasoning. Add more spice if you like with extra Cajun seasoning or red pepper flakes, and serve with hot sauce on the table.

I cook mine in a dutch oven, braiser or covered casserole. Depending on the kind you have they have different names.

Le Creuset calls them braisers. This braiser is my favorite. You'll see it used with my Curry Chicken Drumsticks with Chickpeas too.

Lodge also has a great one called a covered casserole and is quite affordable. I used it for my Jambalaya recipe in these shots.

Sautéing the veggie trinity on the stove top with the meats, then braising in the oven to finish the rice, cooks everything perfectly. The Jambalaya stays nice and stewy, and you have more insurance that your rice won't crust and burn on the bottom.

You'll want seconds and thirds of this one pan Jambalaya, so don't invite too many people! 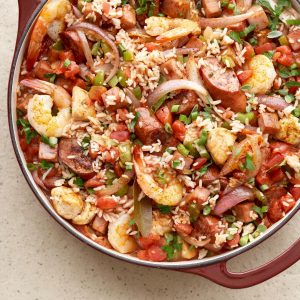