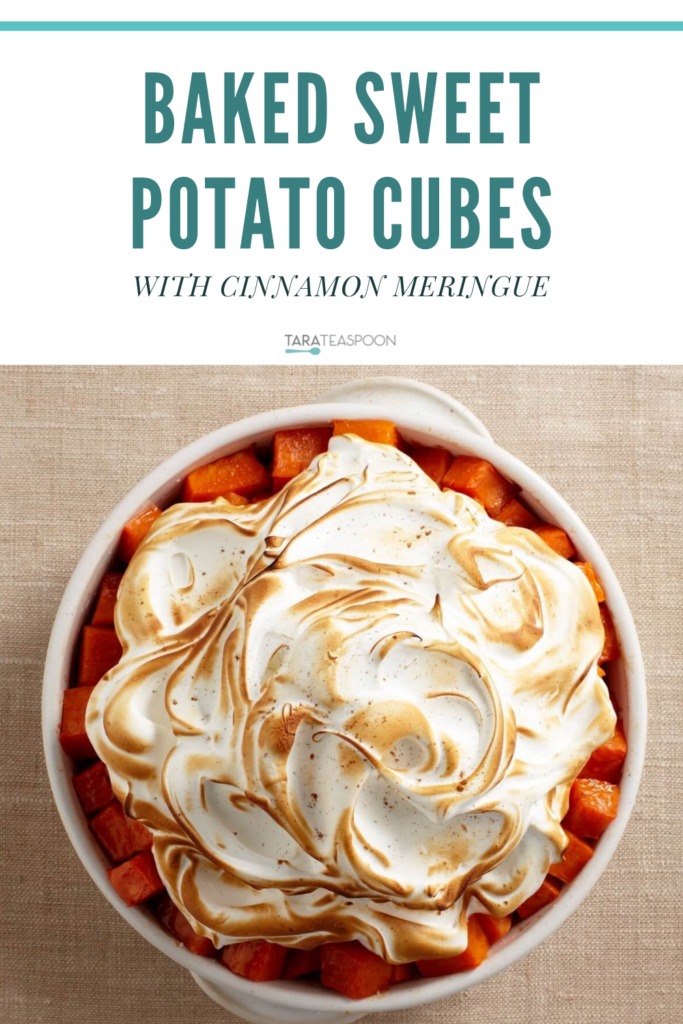 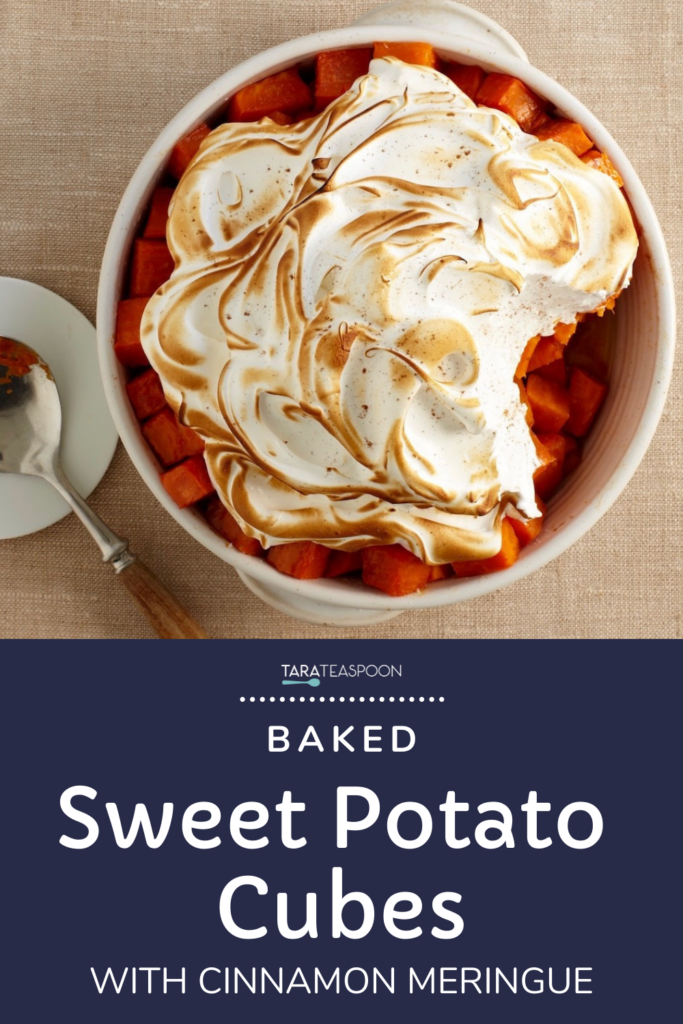 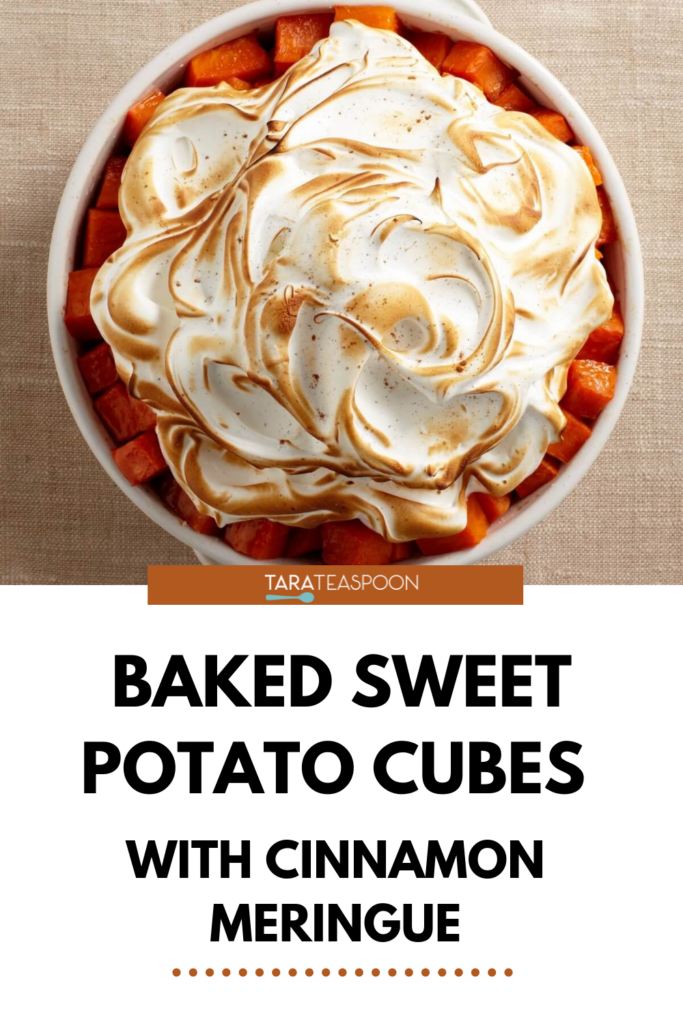 Baked sweet potato cubes with cinnamon meringue is my decadent improvement on the classic Thanksgiving side dish. I replaced the typical marshmallow topping with a fluffy, smooth, spiced meringue.

Side dishes at Thanksgiving are the best! As a kid I would meticulously spoon gravy into the crafted crevice of my mashed potatoes.

I'd assemble perfect bites made from stuffing and cranberry sauce. Buttery green beans were the perfect savory veggie, but king of them all were the marshmallow-topped sweet potatoes.

It was a strategic battle to beat my brothers (and mom!) to the crispiest bits of toasted marshmallow and bite into the brown sugar smothered sweet potatoes. It was dessert...before dessert!

To this day, I still like that hit of sweet with the other savory favorites at Thanksgiving. I just wanted to spruce it up a bit.

Keeping the sweet potato cubes just as simple and tasty, I simply roasted them. Then they get coated with a touch of brown sugar and salt, to bring out the savory flavor.

The topping switched from simple marshmallows to a luxurious, silky, cooked meringue. Not at all hard to make.

It's whisking on the stove and then beating to pillowy peaks. Cinnamon takes it one step further, to give each bite of this Thanksgiving-worthy side a festive feel.

This sweet potato side dish looks impressive, but it uses very simple ingredients. The roasted sweet potato cubes are seasoned with salt and light brown sugar before being cooked.

Then, the sweet potatoes are topped with a homemade meringue. The meringue consists of egg whites, granulated sugar, and just a pinch of cream of tartar.

Ground cinnamon finishes off the meringue and imparts that classic Thanksgiving flavor.

How to Bake Sweet Potato Cubes

If making meringue sounds intimidating, keep reading! I've given tons of tips and tricks for making the baked sweet potato cubes in the recipe card below.

Here's a brief overview of the recipe:

You can place the finished dish under the broiler to get a toasty top on the meringue, or flash it with a cooking torch.

For this recipe, I roasted the whole sweet potatoes for about 50 minutes prior to cubing them. Once they were cubed, the sweet potatoes needed just 25 more minutes in the oven.

Can This Recipe Be Prepped in Advance?

The entire dish can't be assembled in advance, but you can roast the whole sweet potatoes until tender up to two days ahead of time. Then, all you'll need to do day of is make the baked sweet potato cubes and meringue.

More unique side dishes for dinner

Baby Broccoli with Hazelnut Butter is special enough for your Thanksgiving or Christmas table. The delicious toasted nuts simmered in melted butter are a decadent addition!

Skillet Green Beans with Charred Artichokes only takes ten minutes to make on the stove. No oven needed!

Shaved Brussels Sprouts Salad has apples and pomegranate for a fresh and beautiful side. 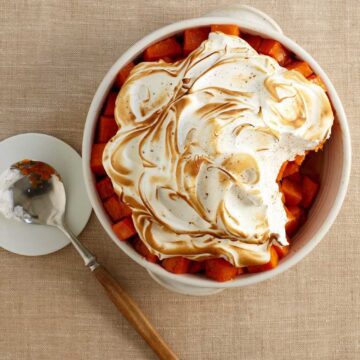 You can place the finished dish under the broiler to get a toasty top on the meringue, or flash it with a cooking torch. I use one like this. The toasted top tastes just like mom's crispy-topped marshmallows. So good!

Calories: 335kcalCarbohydrates: 80gProtein: 5gFat: 1gSaturated Fat: 1gSodium: 346mgPotassium: 801mgFiber: 7gSugar: 43gVitamin A: 32176IUVitamin C: 5mgCalcium: 79mgIron: 1mg
Want to watch videos to show you how to cook?Check out our Youtube and try this recipe and more.