TaraTeaspoon » Tips And Techniques » Everything Rhubarb: How To Prepare Rhubarb For Storing, Freezing, And Cooking 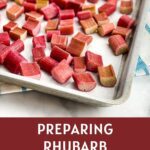 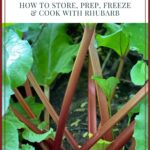 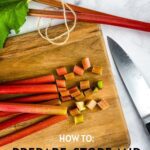 Are you cooking with rhubarb? If so, I've got all the tips on how to prepare, store, and bake with fresh rhubarb. You can harvest it from your own plant, or buy it, then make the most delicious rhubarb recipes.

When rhubarb season comes around, I get busy! I cook and bake whatever I can, and then prepare rhubarb to freeze so I can use it all year long.

I'll tell you how to harvest and prepare rhubarb, but also how to cook with it when it's fresh and ripe. Learn the best way to store it for weeks in the fridge.

Fun fact: rhubarb is actually classified as a veggie! Even though most of us bake with it as we would a fruit.

When is rhubarb in season?

In the northern hemisphere, you can find rhubarb in season from early April to late May and into June depending on the weather. And, depending on your plant, you can harvest it through the summer!

Parts of Washington state will harvest rhubarb into July. And the southern hemisphere produces it around October and November. So if your market orders it in, you can get rhubarb throughout most of the year; it might just be expensive.

In New York City I don't have a garden, but the farmer's market carries it in the spring and I love getting a big bunch!

When I visit my family in Utah I love harvesting the red stalks from my Aunt's giant plant and my dad's two plants.

Try one of my delicious rhubarb recipes:

When and how to harvest rhubarb:

If you have a rhubarb plant that is about 2 years old or older, you can harvest stalks when they are at least 10-inches long.

Gardening Know How has a wonderful article on the details of when to harvest rhubarb and how to do it. There are a couple of ways to harvest the stalks. You can cut them with kitchen shears or a knife near the base of the stalk.

The other way is to hold the base of the stalk and turn it to one side until it snaps near the base.

I like to harvest it in the morning when it may still be cool and crisp from the night, before the sun has heated it up.

Is there a difference between red, pink and green rhubarb?

Yes and no! There are of course different varieties of rhubarb. They come with names like Hawke's Champagne, Timperley Early, and Reed’s Early Superb! There are quite a few more.

My family has no idea what variety of plant they have, but the stalks vary from red to red with a tinge of green.

There's hardly any difference in taste between red and green varieties of rhubarb; and that is just the difference, the variety of plants! And typically it is ready to harvest when the stalk is 10-inches or longer. No need to wait until it's red–it may never turn totally red!

How to prepare rhubarb after harvest, or purchase!

If the store or farmer hasn't done so already, the first thing you'll want to do is trim the leaves off the rhubarb stalks. The leaves are poisonous! Even deer don't eat them. However, the stalks are perfectly safe to eat.

Discard the leaves and trim the harvested end. Then rinse any dirt off in cold water, gently rubbing the stalk. Drip or pat dry with a clean towel or paper towel.

Prepare rhubarb to use fresh as described above. Simply wash it and cut it to the size you want for the recipe. Use it immediately.

Can you eat rhubarb raw?

You can absolutely eat rhubarb raw! In fact it's a favorite snack in the family to sprinkle the stalk with salt and eat the salty and sour bites. Of course you can sprinkle it with sugar too.

You can finely chopped the stalks and sprinkle it on top of food, add it to a salsa or macerate it in sugar.

Do you peel rhubarb?

You don't need to peel rhubarb to eat it or cook with it. It's just not necessary.

I know a very famous baker and cookbook author who discusses peeling the stringy outside from rhubarb stalks. I won't name names, because there's just no point!

Rhubarb stalks are inherently "stringy." They aren't like celery with a few strings and a tender inside. The entire stalk is made of long fibers.

To prevent stringiness, the best thing to do it cut the stalks crosswise into small pieces before cooking or eating it. That way the fibers are short and won't seem stringy.

How to store rhubarb in the fridge

To store rhubarb in the fridge just wash and pat dry, then wrap the stalks in aluminum foil and store in the fridge for up to two weeks.

If your stalks are too long to fit in your fridge, you can cut them in half and store them in a zip-top bag for up to two weeks as well. The only thing is the cut ends may split and curl! Honestly, you can use these split and curled ends, or trim them off. The rhubarb will still be crunchy and tasty.

You can freeze rhubarb!

You can absolutely freeze rhubarb and the process is incredibly easy! Just follow the steps in my Freezing Rhubarb post.

It's as simple as cutting it, freezing it in a single layer and then packing it air tight in freezer bags.

I’ve been in the food publishing business for over 20 years, creating recipes and food styling for magazines, books, television and advertising. Find out more about me!

Previous Post: « How To Freeze Rhubarb: Use For Cooking and Baking All Year
Next Post: Favorite Apple Crisp Recipe With Oat Topping »