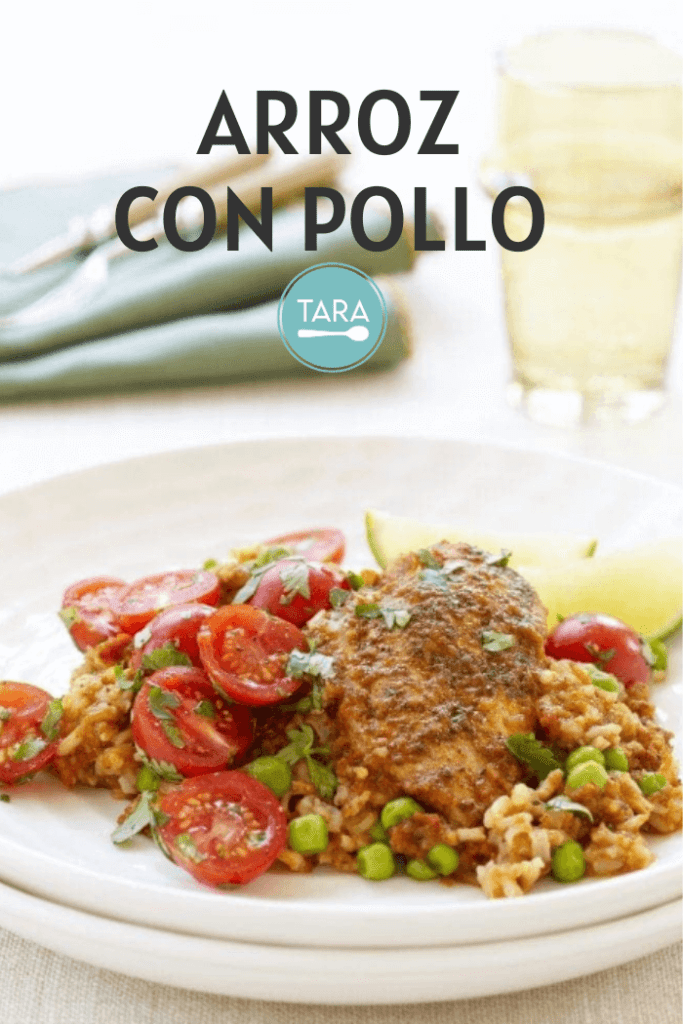 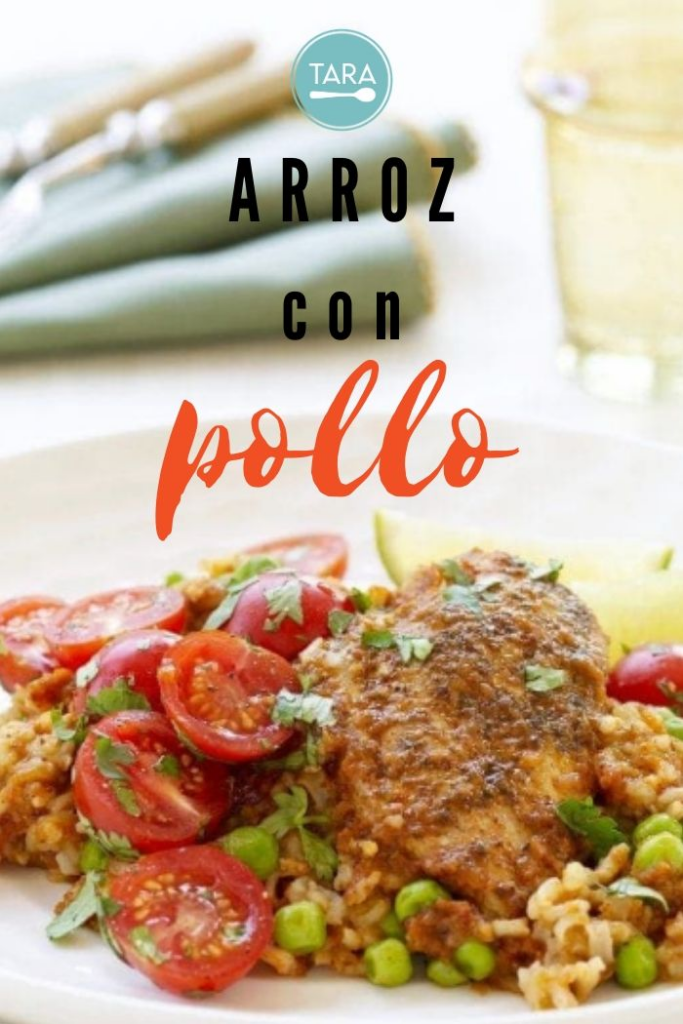 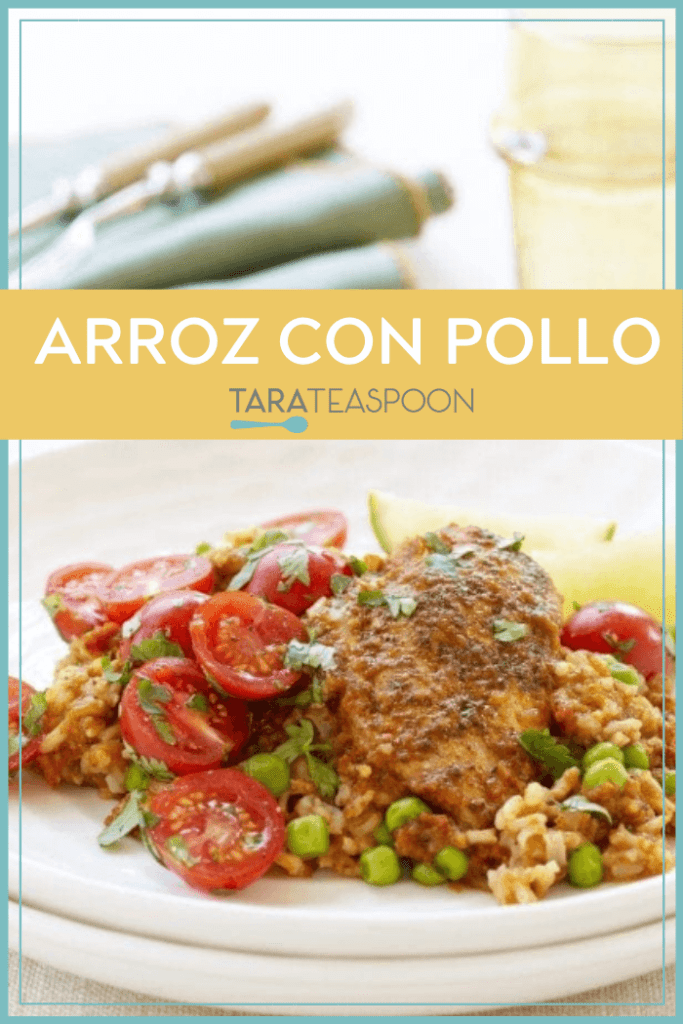 Easy arroz con pollo is a Mexican chicken and rice casserole, with flavorful spices and smoky chipotle. Even better that it simmers in the slow cooker while you do other things!

Oh the beauty of a slow cooker. A machine designed for a simple purpose–to cook food slowly enough that you can walk away, and come back to a nice meal.

When done correctly, these stewed dinners can be comforting, sustaining and down right delicious.

As far as how to make chicken and rice, I think the great country of Mexico got it right!

In this slow cooker arroz con pollo the tender poultry is seasoned with spices, nestled and simmered in rice with chicken broth and enhanced with some smoky chilies.

I wanted to enjoy this meal, without having to tend it. Traditional one pot chicken and rice needs to be watched so the chicken is cooked through, and the rice is done, all at the same time.

So what's my trick for cooking rice in a crock pot without it getting soggy? I'll tell you my one great swap below.

How to make it

An authentic arroz con pollo recipe is usually made in a Dutch oven, on the stove top or in the oven.

I've done my chicken and rice casserole recipes countless times in a Dutch oven, and it's delicious, but I have to tend the heat, crack the lid occasionally, and watch it like a hawk so everything is cooked perfectly at the same time.

I wanted a an arroz con pollo crock pot recipe that was not only easy, maybe a little healthy and still crowd-pleasing.

After a few times through trial and error I came to a surprising solution. A surprise for me because I NEVER use this ingredient.

I've always stayed away from instant rice because it comes out water logged and flavorless. But when I tried it in this one pan chicken and rice dish, it worked.

No one will ever guess, you didn't just slave away over this savory and flavorful slow cooker arroz con pollo.

I loaded the casserole with extra flavor, browned the chicken for good caramelization, and added the rice just at the end of slow cooking so it became just the right texture.

Serve this with some fresh cherry tomatoes and cilantro. And for me, I like a generous squeeze of lime.

I didn't have to do all the testing on this one. Cook's Illustrated did this for all of us and named this KitchenAid and this Cuisinart the best versions of our favorite little machine.

Most slow cookers are very comparable. They cook up one dish meals with ease and things don't often go wrong.

One thing I like to make sure of on a slow cooker or crock pot, is that the lid isn't super loose. Some have the rubber gasket around the edge that helps seal them to the base.

I like the rubber seal, it holds the heat in. I've worked so hard (just kidding, not at all. It's a slow cooker so it's supposed to be easy!) to build up the heat in the slow cooker, why do I want it seeping out of the lid area?

My solution is to simply cover the top with a folded kitchen towel. It holds in the heat and helps the food inside cook evenly and at the right speed.

I added some simple and authentic flavors to this easy chicken and rice.

• Use bone in chicken breasts so they stay juicy. You can use boneless if you'd like.

• Spices from your cupboard, like oregano, chili powder and cumin are the perfect trifecta of Mexican seasonings.

• Diced tomato, onion and garlic are a fresh hit of authentic flavor for this simmered stew. Then add a sprinkle of fresh cilantro at the end.

• Canned chipotle in adobo adds a smoky taste and depth of flavor. 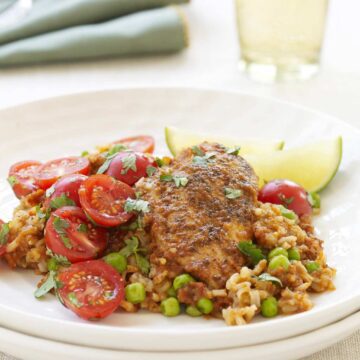 Easy assembly and ready for dinner when you are! • This is the best chicken and rice casserole with authentic Mexican flavors. Add a squeeze of lime at the end for a burst of freshness.

Kitchen equipment for this recipe: