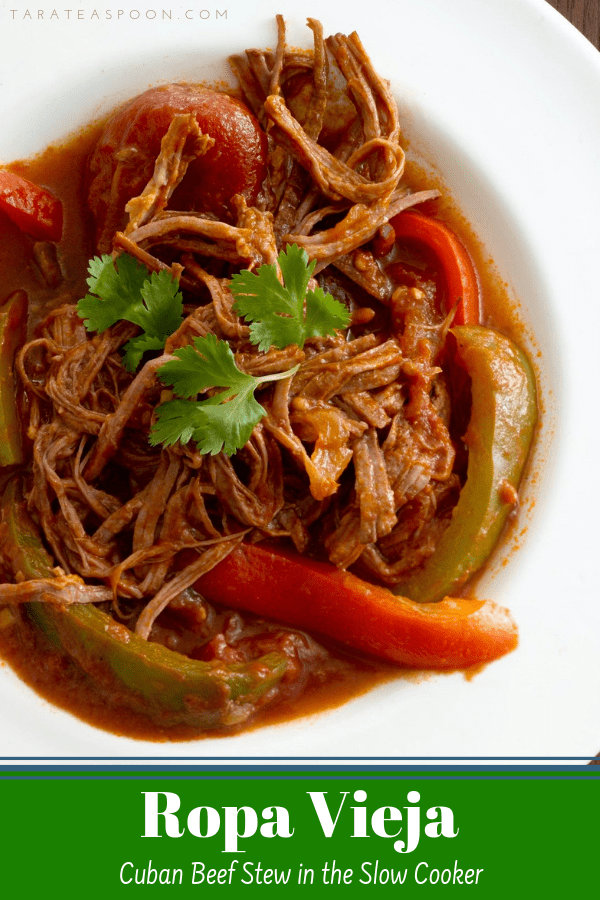 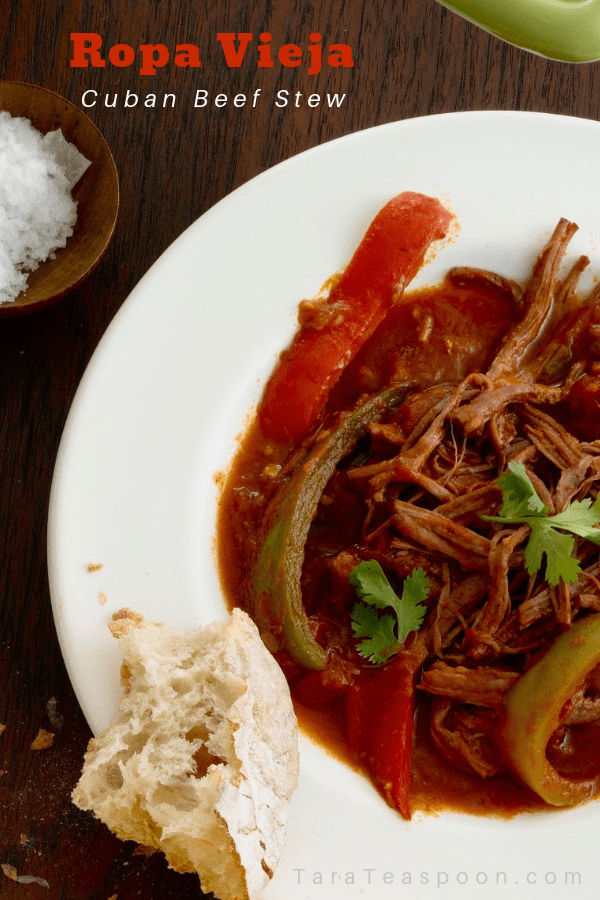 Ropa Vieja is a favorite dish at my local Cuban restaurant. It's a slow cooker braised beef stew with peppers and great tomato flavor. I recreated it so I could dish it up any time!

This ropa vieja braised beef stew with peppers and onions resembles a heap of colorful rags, or "old clothes." Thus the Spanish name: Ropa Vieja! It heralds from clear back to the Middle Ages, but I'm sure there have been some changes (wink).

What is Ropa Vieja?

Popular in Spain, it was traditionally a way to stretch the leftovers of other stews. Hmm I'm into this...I am always concocting things from the leftovers lurking in my fridge! The recipe and tradition made it's way to Cuba where it got it's current, and my favorite, flavor profile.

There's a Cuban Chinese restaurant up the street from my apartment here in NY. Flor de Mayo has been around since I can remember. And yes, it's Cuban and Chinese dishes in one restaurant! Lucky Peach magazine explains:

"[There was an] exodus of ethnic Chinese from Cuba from 1959 through the 1980s. The Cuban-Chinese are largely the descendants of the quarter million indentured Cantonese laborers who traveled to Latin America in the late nineteenth century in hopes of finding their fortunes or supporting families back home. Instead, they found themselves shunted into backbreaking labor like planting and harvesting sugarcane for Caribbean plantations. In Cuba, many of them remained behind, raised families, and developed a culture that was neither entirely Chinese nor Cuban. For a while, Havana’s Chinatown thrived, and proved a popular dining and drinking destination for both foreign tourists and locals.
But when Fidel Castro swept into power and began to target the merchant class, the Cuban Chinese found themselves in jeopardy. The ones who moved to the U.S. opened up inexpensive “Criollo China” eateries catering to fellow exiles—ropa vieja on one page of the menu, chow mein on another."

The ropa vieja there is my favorite. Perfectly tangy and tomatoey, just a little fatty, sweet peppers and onions that melt in your mouth, all served over yellow rice with beans. Of course there are other versions, but I happen to love this one.

Could I make ropa vieja in the slow cooker?

I knew I had to figure out how to make the same delicious stew at home, because one day, heaven forbid, I won't live in NY or the restaurant will go the way of so many and shutter.

Plus who doesn't love a good slow cooker recipe? I make mine in my trusty Hamilton Beach slow cooker. But since the recipe calls for browning the beef before stewing it,I have my eye on this gem. You can sear and slow cook all in one machine! Magical.

I wrote this recipe before Instant Pots existed! Now you can make this recipe right in your multi-cooker because of all the capabilities. You can sauté and then turn the machine to slow cook or pressure cook so the meat gets nice and tender. I have a Breville multi cooker and love it!

How to make Ropa Vieja or Cuban Beef Stew:

I pulled out my veggies, a little sofrito for depth of flavor and voila! Behold the make-at-home version of this homey, delicious dish.

Sofrito is similar to mirepoix in that it mixes onions and veggies, often with tomatoes, and is used as a flavor base for many Latin dishes. Usually loaded with garlic, onions and chili peppers, it adds a bit of spice to each dish.

Traditional sofrito is made in batches and kept in the fridge. Onions, garlic, tomatoes, peppers and herbs are cooked until very soft. The flavor base is spooned into the pan when making soups, stews and sauces. I bought prepared sofrito for this dish because of the ease and traditional flavor.

I used flank steak, the traditional beef used for this Cuban stew. It is a tough piece of meat, but once braised, it is easy to shred and delicious.

Be sure to cook up some yellow rice and beans (my preference is black beans in their sauce, but they offer pinto if you'd like!). 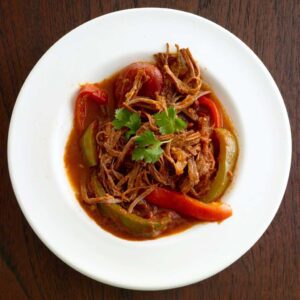 Be sure to cook up some yellow rice and beans to serve with this deliciousness.