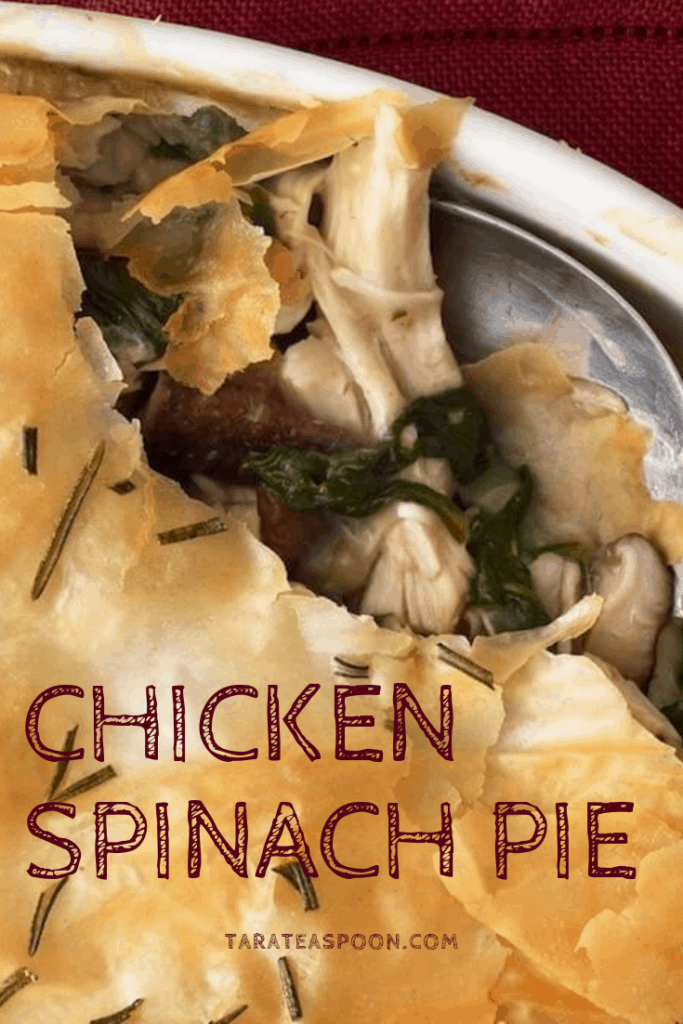 My take on a chicken pot pie with a healthy, spinach pie twist. I added mushrooms and greens to load up on awesome veggies, and a light, crisp phyllo crust.

This easy pot pie comes together quickly in a skillet. Then, simply transfer it to a baking dish and top it with a few layers of buttered phyllo.

The phyllo bakes into a light, crispy crust – leaving you with a tasty version of pot pie that isn't weighed down by a traditional pastry crust.

Use a store bought rotisserie chicken for this comforting homemade meal. The flavors in this chicken and spinach casserole are a delicious combination of veggies, chicken and gravy.

I used fresh mushrooms cooked in a little butter and olive oil to start the development of flavors. I chose shiitake mushrooms because they are tender when cooked and have a great mushroom taste without being overpowering.

I love adding spinach to my main dishes. It's an easy way to get in healthy green veggies, without changing the flavor of the entire dish too much.

I added spinach to my chicken enchilada casserole (an easy main dish using polenta instead of tortillas!).

Spinach also makes a delicious appearance in my cheesy baked ravioli dinner. It only takes a few minutes to prepare!

Tools Used for this Pot Pie:

How to make chicken and spinach casserole:

A bit of chicken broth, lemon juice and rosemary make the gravy for this pot pie made in a skillet. Start by sautéing your veggies, then make the gravy.

Try my other easy, weeknight meals with chicken or spinach! 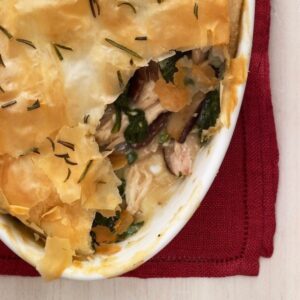 I used fresh spinach in this recipe, but you can swap it for a 10-oz box of frozen spinach. Thaw the spinach and squeeze out the excess liquid before using.   To make this Gluten Free, swap the all-purpose flour with GF All-Purpose Flour, or 1 ½ tablespoons cornstarch. Top with Gluten Free breadcrumbs tossed in the butter, instead of phyllo.