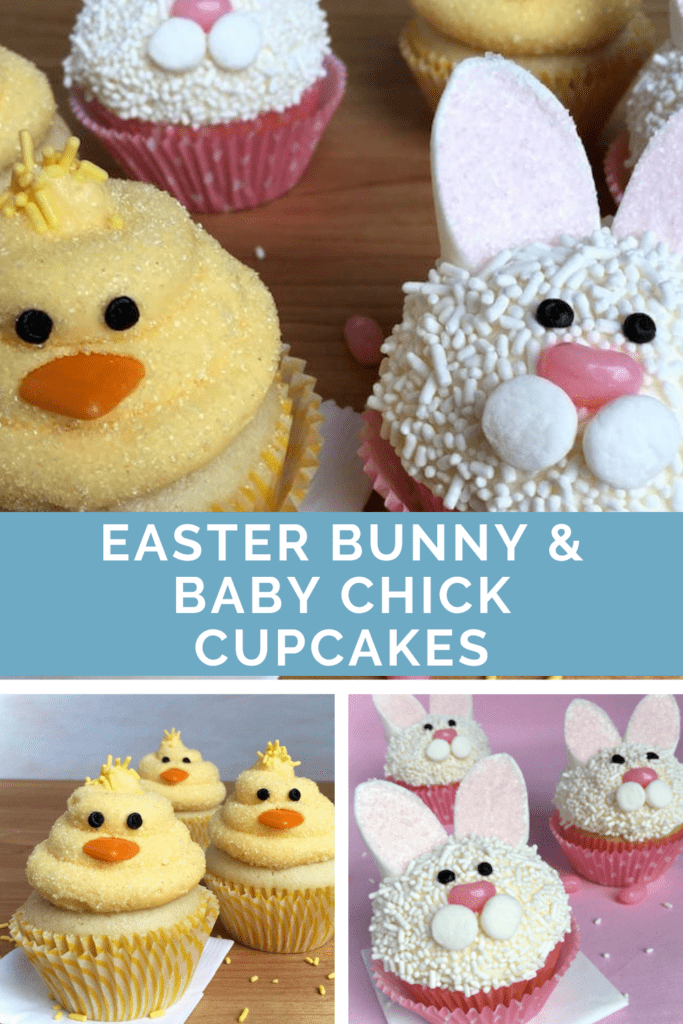 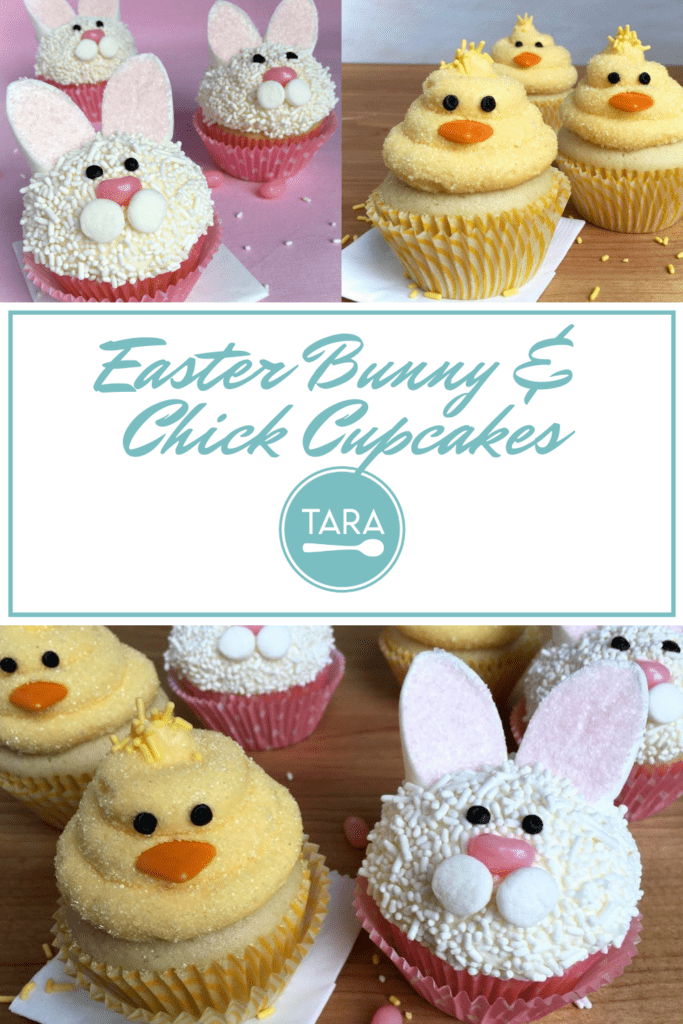 Make these sweet Easter cupcakes for your spring festivities. I've given instructions on how to make Easter bunny cupcakes as well as Easter chick cupcakes!

For this Easter cupcake recipe, you can bake your own cupcakes and make your own frosting, or use store-bought!

I opted to use my go-to vanilla cupcakes recipe and my fluffy vanilla frosting. Then, I adorned the Easter cupcakes with simple decorations to make the best treats for my guests.

They're so cute, easy to make, and will be a hit with the kids and adults alike!

I thought I would stop with the fluffy Easter bunnies, but I couldn’t resist some little yellow chicks as well. Marshmallow bunny ears, and sweet yellow Easter chick cupcakes for the win!

A cupcake is just a blank canvas for delicious creativity. I wanted to make cute, Easter-worthy treats that would take these little blank canvases into spring.

Easy is the key here for these Easter cupcake recipes. I started with my favorite Vanilla Cupcakes recipe and a double batch of my Fluffy Vanilla Frosting.

My vanilla frosting is one of the most popular recipes on my site. Rightly so, it is melt-in-your-mouth delicious, and easy to make.

It works for cupcakes, cakes and cookies. Leftovers even make stellar graham cracker cookies (the cookies you made as a kid with frosting simply slathered between two graham crackers!).

Both the cupcake recipe and the frosting are simple, basic recipes that the kids can even help with.

Tint one batch of my fluffy vanilla frosting yellow for the chicks. Leave the other batch white.

From there, you can use store-bought candies and sprinkles to transform these into Easter bunny and chick cupcakes. I've listed exactly what you'll need in the section below.

Can I Use Box Cake Mix?

Yes, feel free to reach for a box of your favorite flavor and bake the cupcakes. That will work for these Easter cupcakes, too.

I like to fill the cupcake papers with about a tablespoon more batter than the box tells you to. You'll probably end up with 23 cupcakes instead of 24, but the cake will come up higher in the papers and work well for these Easter cupcake ideas.

Can I Use Store-Bought Frosting?

I don't suggest store bought frosting just because I don't like the flavor. Can you use it? Technically yes, but here's a tip.

Store-bought frosting isn't quite thick enough to pipe and hold the shape for the bunny and chick cupcake toppers. You'll need to put the canned frosting in a mixing bowl and beat in about ¾ cup confectioners' sugar for each can.

How to Make Easter Bunny Cupcakes

Here are the tools and decorations you’ll need for the adorable Easter bunny cupcakes:

Tip: Put a little cooking spray on the scissors so the marshmallows don’t stick with each cut.

How to Make Easter Chick Cupcakes

Here’s what you’ll need for the fluffy yellow chick cupcakes:

Tip: The orange chiclets are perfect for little beaks! If your store doesn’t have chiclets gum handy, get creative and use what you can find; you could use Airheads candy, or orange M&M's. 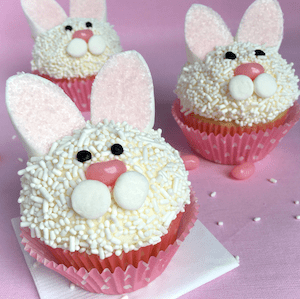 For the Easter Bunny Cupcakes

For the Chick Cupcakes

Serving: 1gCalories: 157kcalCarbohydrates: 25gProtein: 2gFat: 5gSaturated Fat: 1gSodium: 142mgPotassium: 40mgSugar: 15gVitamin A: 20IUVitamin C: 0.1mgCalcium: 56mgIron: 0.6mg
Want to watch videos to show you how to cook?Check out our Youtube and try this recipe and more.

I've compiled all my best tips and tricks onto one page. And it's 100% FREE!