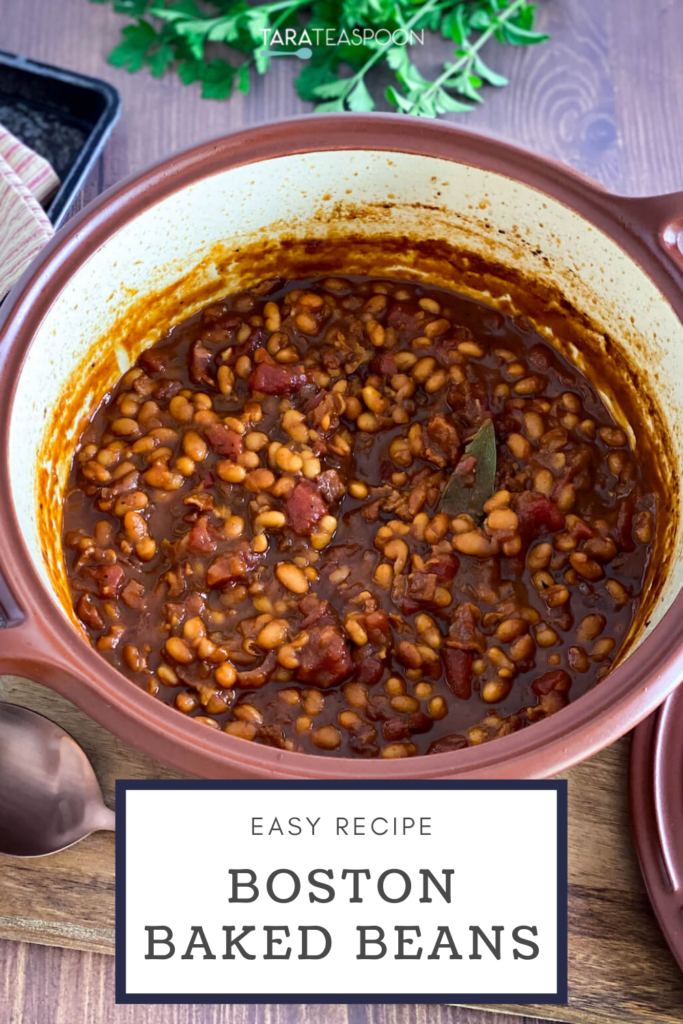 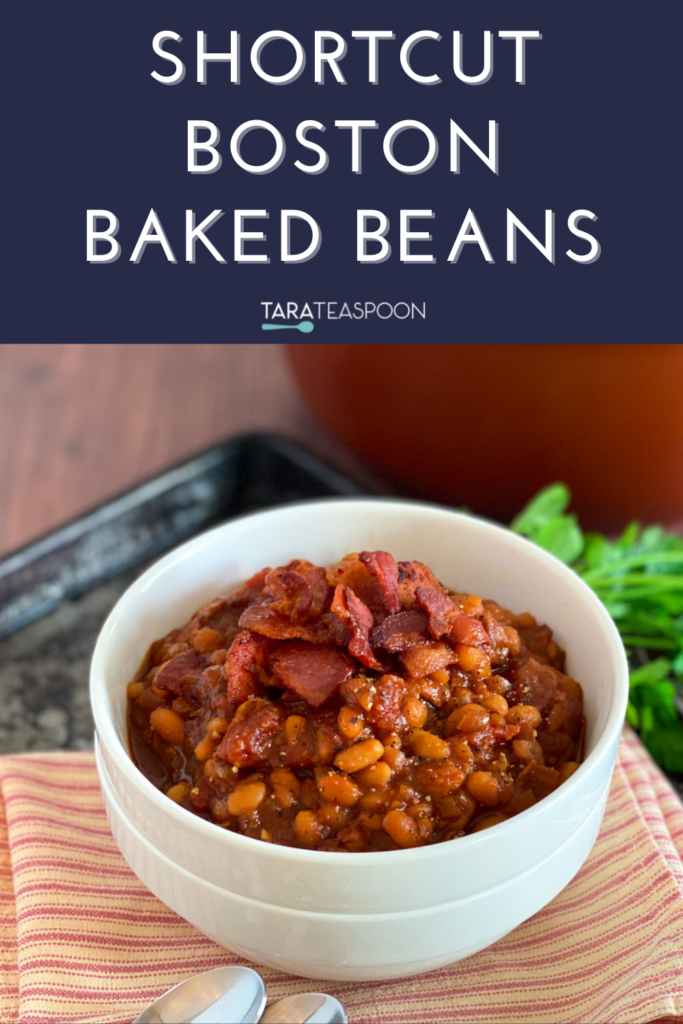 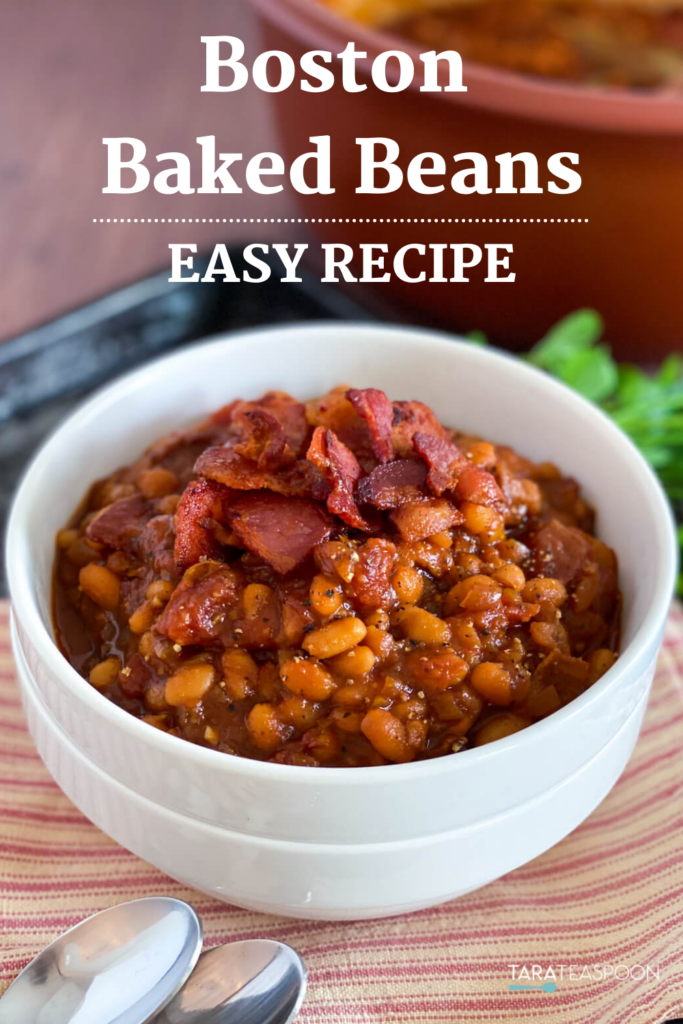 Making Boston baked beans has never been easier! Canned beans are used to speed up the cooking time, but the homemade baked beans still pack in the same savory and sweet flavors as more traditional recipes.

When I worked at Martha Stewart Living magazine I helped create a Boston Baked Bean recipe that was very authentic. We slow-cooked them in a special-order ceramic bean pot with clove-studded onions and tangy canned tomatoes.

I wanted that same authentic taste in a fraction of the time, so I created a homemade baked beans recipe using canned beans and concentrated flavors like molasses and ground cloves.

What Are Boston Baked Beans?

Traditional Boston baked beans are slow-cooked until tender and flavored with bacon (or salt pork) and molasses. Most recipes also instruct you to bake the beans with an onion that's been studded with whole cloves.

Between the onion, bacon, molasses, and cloves, Boston baked beans are packed with sweet and savory flavor.

Most baked bean recipes instruct you to use dried beans, which take hours to cook in the oven. As much as I love traditional Boston baked beans, I prefer using canned beans as a shortcut when making this recipe.

Although this recipe has you bake the beans for just under an hour, it still perfectly melds the flavors and creates a thick, rich sauce. Win-win!

Making homemade baked beans in the oven is so much easier than you might think! Navy beans are traditionally used for making baked beans, and that's what I used in this recipe.

Onion and garlic flavor the beans, alongside a couple of tablespoons of brown sugar and unsulfered molasses. Do NOT use blackstrap molasses, as it's incredibly bitter and will not deliver the same rich flavor.

I prefer using a blend of canned diced tomatoes and ketchup in my baked beans to prevent them from being too sweet.

Of course, the best baked beans are baked beans with bacon, so I added a few slices to the mixture to add some smokiness. Worcestershire sauce, yellow mustard, and a blend of herbs and spices round out the recipe.

Of particular note are the ground cloves. Just a pinch of cloves adds to the classic Northeast flavor.

However, you can add up to ⅛th teaspoon for an even richer and sweeter flavor. I'd suggest everyone start with a pinch and then add more to the next batch if desired.

How to Make Homemade Baked Beans with Canned Beans

Even though I made these baked beans with canned beans, they taste like you let them cook low and slow in the oven for hours!

Step 2: Add the bacon and cook, stirring often, until it is just crisp and fat is rendered. Remove the bacon to a bowl using a slotted spoon.

Step 3: Add the onions and garlic to the bacon fat in the pan and sauté until soft and translucent.

Step 4: Add all of the other ingredients to the pot with the onions, including the cooked bacon.

Step 5: Bring the bean mixture to a simmer.

Step 6: Remove the stirring spoon, cover the pot with a lid and transfer to the oven.

Step 8: Let the homemade baked beans rest out of the oven for 10 minutes before serving.

Equipment Needed for This Recipe

Even though this is a baked bean recipe using canned beans and the bake time is significantly reduced, it's still so important that you use a high-quality Dutch oven for cooking the beans.

If you try to bake the beans in a cheaper, thinner baking dish rather than a Dutch oven, the beans will likely scorch on the bottom, and/or the flavor won't develop as well.

Emily Henry Dutch ovens also double as serving dishes. The pot holds heat long after being removed from the oven, so your baked beans won't turn cold on the dinner table.

How Long Do Baked Beans Last?

Store leftover Boston baked beans in an airtight container in the fridge for up to one week. You can reheat them in the microwave or on the stovetop, adding ½ cup to 1 cup water as needed to make them saucy.

Can You Freeze Baked Beans?

Yes, leftover baked beans freeze incredibly well. Seal them in freezer bags or freezer-safe containers for up to six months.

When ready to eat, thaw the beans overnight in the fridge and then reheat them on the stovetop or in the oven. You may need to add additional water to make them saucy again.

What to Serve with Baked Beans

These easy baked beans pair nicely with all of your BBQ recipes and potluck favorites! Some of the best things to serve with baked beans include:

Tips for the Best Ever Baked Beans 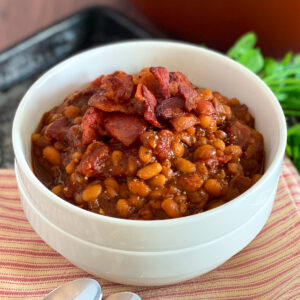 Notes: If using dried beans you will want to cook 1 pound of dried navy beans according to package directions. Drain and add them to the recipe when you would add the canned beans. Storage: Store leftover beans in an airtight container in the fridge for up to a week. Reheat in the microwave or on the stovetop, adding ½ cup to 1 cup water as needed to make them saucy.