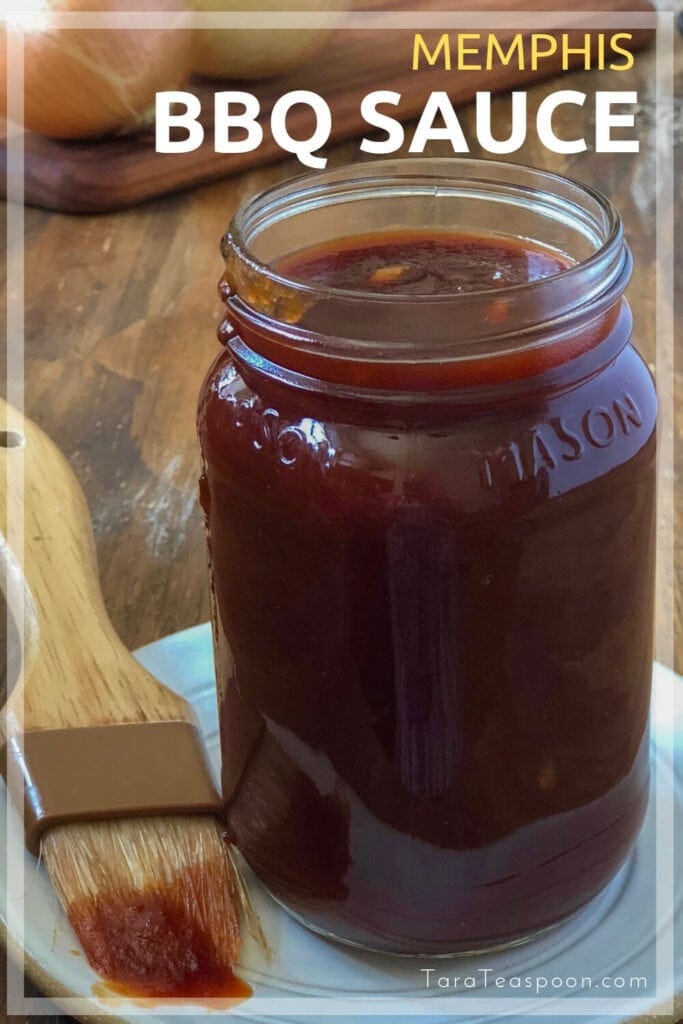 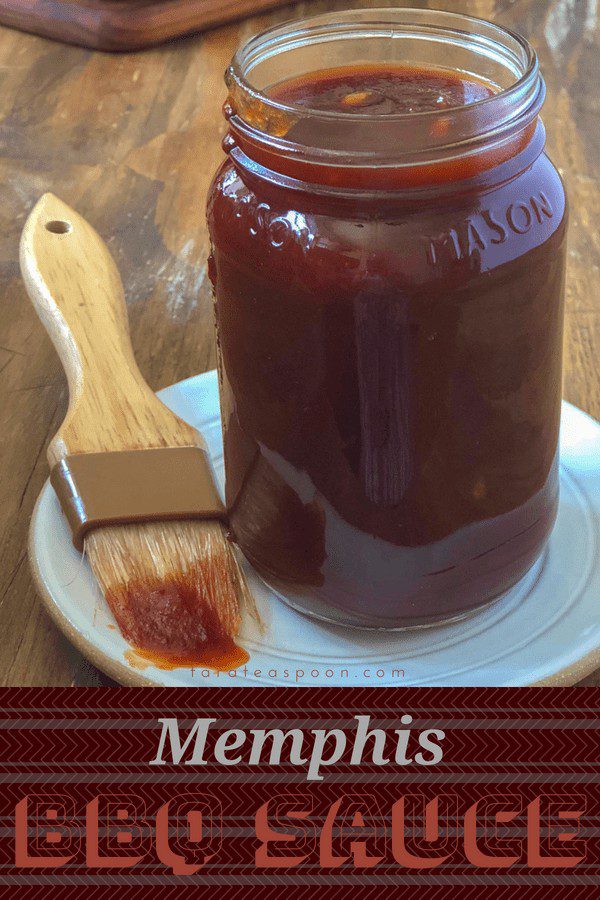 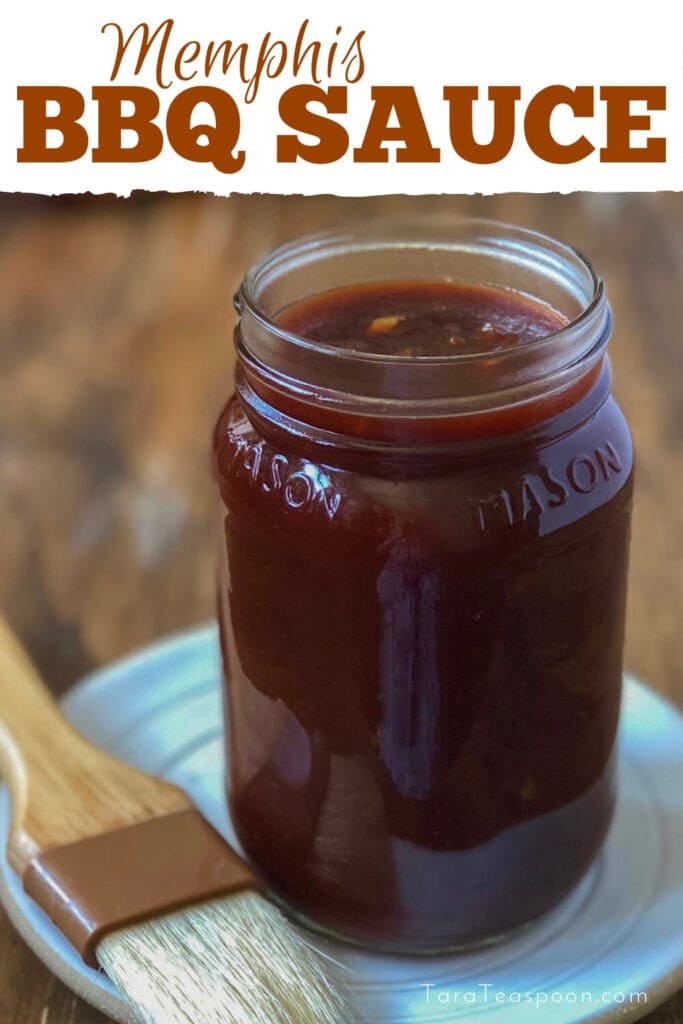 This Memphis BBQ sauce recipe is the perfect finishing sauce for ribs, pulled pork and chicken. It's tangy and thin, not sticky and sweet, with just the right amount of spicy kick!

Imagine yourself sitting on a porch swing in the South sipping ice cold lemonade. Kind of a nice relaxing picture, right? Well, we might not all be able to live there, but once you make my delicious Memphis BBQ sauce recipe Southern living won't feel so far away.

The South is known for good BBQ, but Memphis is a city that is especially proud of the way they do BBQ.

Memphis BBQ is all about the pork. Whether it's a slab of ribs or a pulled pork sandwich, pork is the go-to choice for meat. Speaking of pork, have you tried my pork tenderloin or pork kabob recipes?

Memphis BBQ sauce is a true finishing sauce. Slather it on your chicken, ribs and pulled pork after it comes off the grill.

What goes into Memphis-style BBQ sauce?

I’ll tell you what ingredients are needed for authentic Memphis BBQ sauce.

Every BBQ spot in Memphis probably has their own secret sauce recipe and while we can't know all their secrets, there are some elements you'll always find in their sauce.

The base of my Memphis BBQ sauce recipe is made up of ketchup, honey, and cane syrup (more on that in a bit!). It’s all flavored with onion, cider vinegar, and a special blend of spices.

Vinegar and ketchup are found in almost every Memphis BBQ sauce recipe. But what about kosher salt, does it really taste different than regular table salt? Surprisingly it does make a difference.

Kosher salt has a milder flavor than table salt but keeps all of the saltiness. Just not as harsh on your tastebuds. This is perfect for this recipe so you don't overpower the other flavors!

You want the homemade BBQ sauce to be thin and tangy with just a little sweetness. A good combination of flavors pair well poured over my pulled pork or served with a rack of ribs.

What is cane syrup?

Every authentic Memphis BBQ sauce recipe includes cane syrup. Cane syrup is super popular in the South where it is used for everything from a condiment to an ingredient in favorite recipes like sweet tea. Pancakes, drinks, pies, anything sweet and it likely has cane syrup in it or on it.

Cane syrup comes from the sugarcane plant and is made by boiling sugar cane juice in kettles until the thick dark syrup is formed.

What can I substitute for cane syrup?

Cane syrup is essentially just a step before what molasses is as sugar boils. This is why, if you can't get your hands on cane syrup and still want to make this tasty Memphis BBQ sauce recipe, you can substitute the cane syrup for your own mixture of equal parts molasses and corn syrup.

As an alternative, I also grab Lyle's Golden Syrup if a Southern variety isn't available at my store. But you can order the real thing online with the link above.

How to use this tangy BBQ sauce

Memphis BBQ Sauce is not a mop sauce or a marinade. This is a true finishing sauce. One for dipping, dunking, and slathering.

There is a fair amount of sugar in the sauce and other ingredients that burn over the high heat of the grill. Simply season and grill your chicken, ribs or steak first, then slather it with sauce the last few seconds on the grill.

Drizzle on more when you eat. Try it on my heavenly Memphis Smoked Bologna Sandwich. It’s also a great homemade BBQ sauce for pulled pork (if cooked low and slow in a slow cooker or the oven) or spread atop a grilled hamburger.

How long does BBQ sauce last?

Because this Southern BBQ sauce recipe is cooked on the stovetop first and uses mostly shelf-stable ingredients, it will last up to 3 months in the fridge. Store it in an airtight container to keep it fresh.

Try some other Memphis-style BBQ recipes: 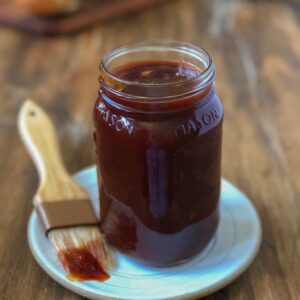 Nutritional information is for 1 cup of sauce.   I kept this sweet, spiced sauce mild, but you can kick up the heat by adding a few more dashes of hot sauce!

Calories: 377kcalCarbohydrates: 98gProtein: 2gFat: 1gSaturated Fat: 1gSodium: 3349mgPotassium: 443mgFiber: 1gSugar: 92gVitamin A: 547IUVitamin C: 5mgCalcium: 23mgIron: 1mg
Want to watch videos to show you how to cook?Check out our Youtube and try this recipe and more.