This recipe was created for my sweet friend Camas. For her birthday, she requested peanut butter brownies. I have a peanut butter icing for brownies recipe already, but, since I love my friend and I love to embellish simple recipes, I decided to create this two-tier chocolate brownie cake with a whipped peanut butter frosting.

I won Camas’ approval, as well as that of family, friends and even strangers. So, I figure that if I serve this cake to a cute guy, his mind will be blown by its magic and will subsequently want to be my boyfriend. I suggest the same plan for anyone in the boyfriend market.

This recipe is the perfect marriage of peanut butter brownies and chocolate brownie cake.

For more indulgent desserts you can make with brownie mix, try my amazing Think Outside of the Box Brownies.

This take on a peanut butter brownie is a great go-to because it’s decadent and so simple to make.

How to make brownie cake:

For the cake, use any chocolate brownie mix, separate the batter in two and bake until just cooked through. After you've let the pans cool, pipe the peanut butter fudge frosting on both tiers and sprinkle with chopped peanuts.

You can also make homemade brownies if you'd rather. You're brownie rounds will be thicker if you use 7-inch round pans. I used 8-inch round pans in the images.

If you don't like peanuts, or are allergic to them, you can make this chocolate brownie cake with my Fluffy Vanilla Frosting or Whipped Chocolate Ganache Frosting. 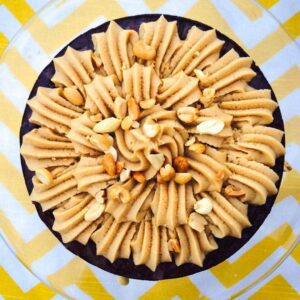 The nutrition is calculated for 8 servings.

Here are more of my favorite recipes:

I’ve been in the food publishing business for over 20 years, creating recipes and food styling for magazines, books, television and advertising. Find out more about me!

Recipe and photos by Tara Teaspoon