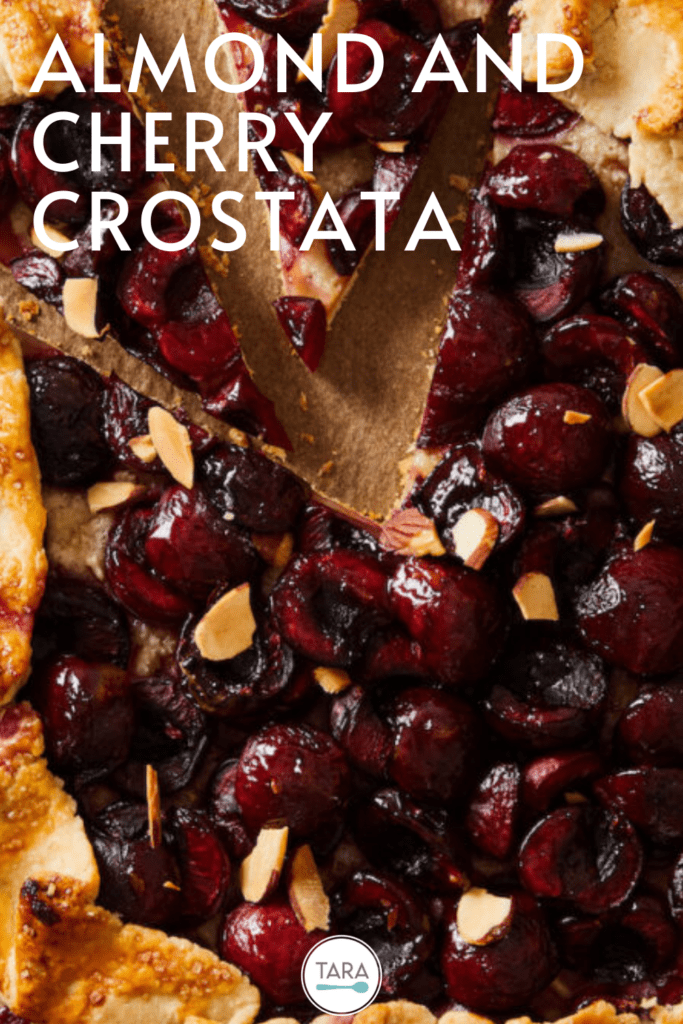 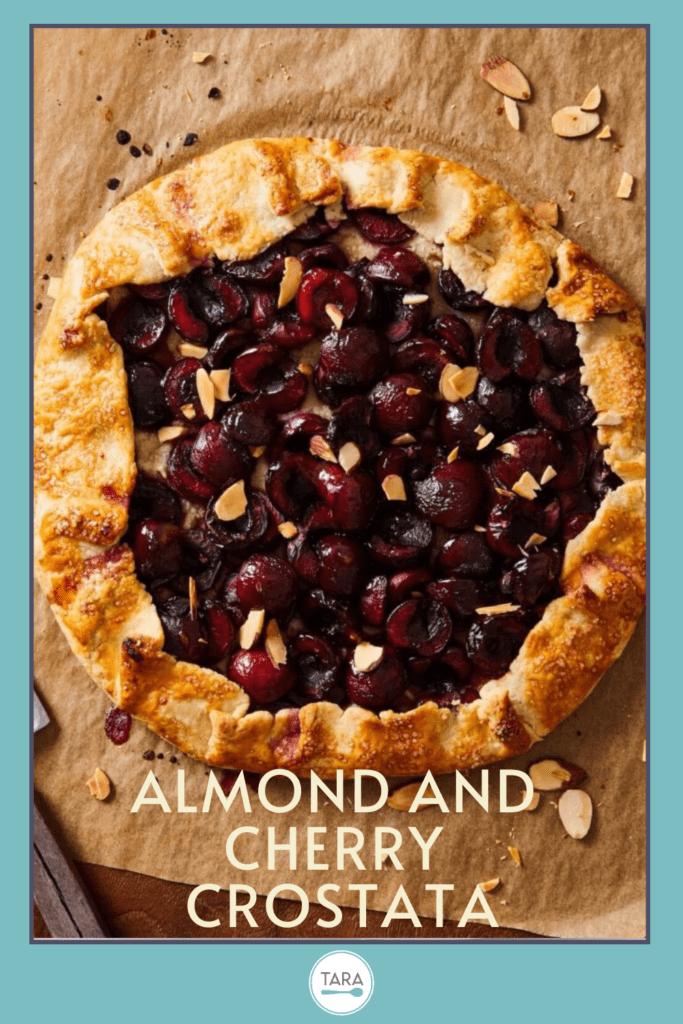 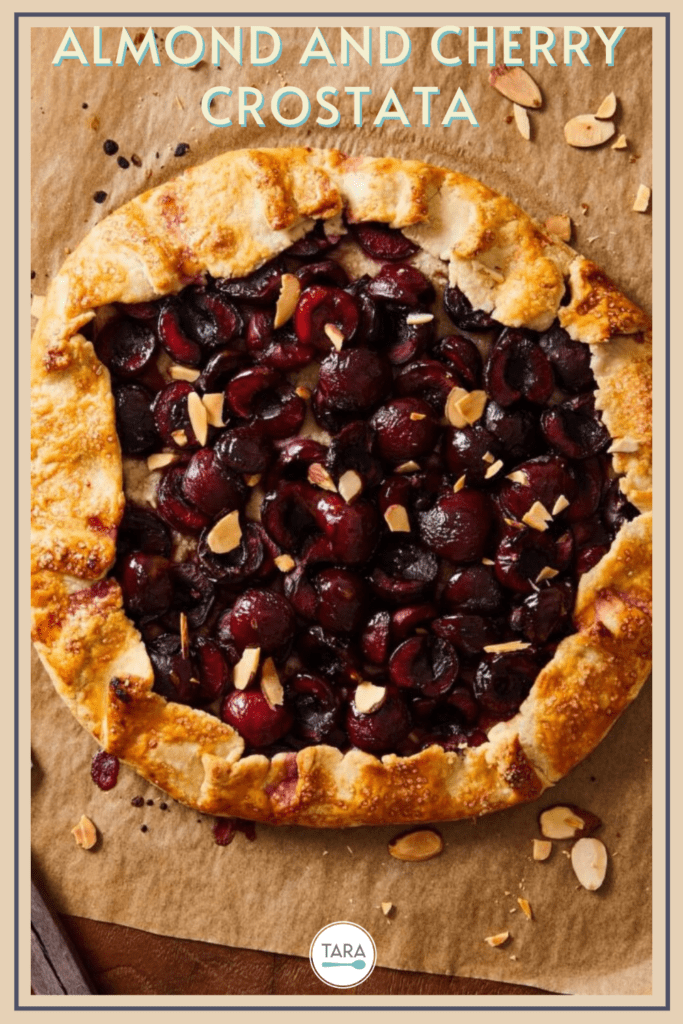 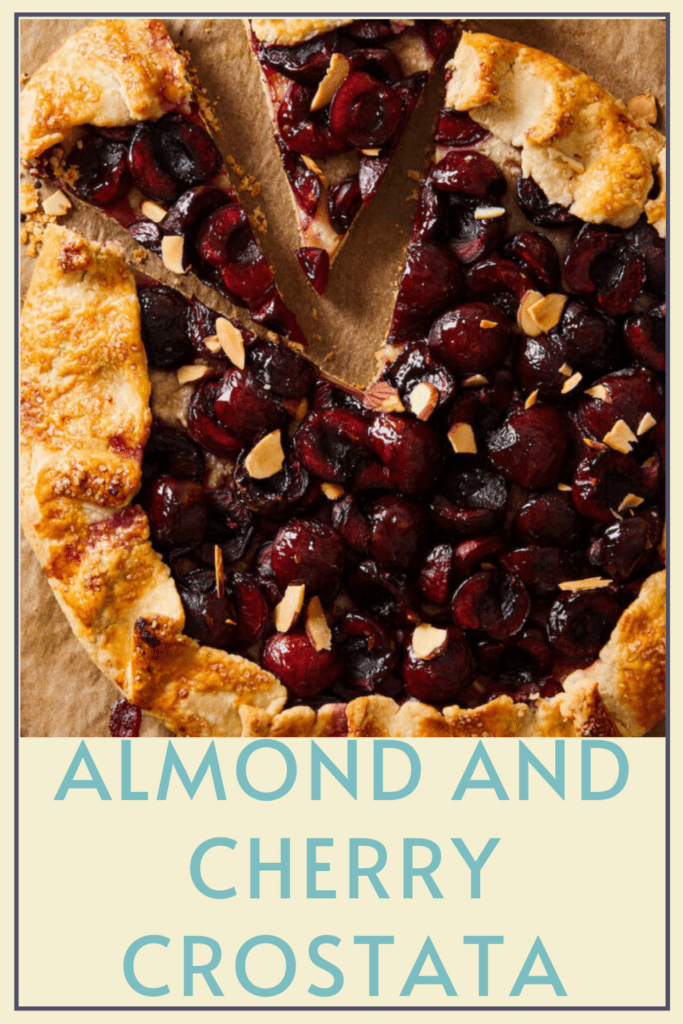 This recipe for cherry crostata, or rustic pie, is filled with a homemade almond filling called frangipane. I'll teach you how to make the best cherry crostata or cherry galette.

With a buttery pastry crust and juicy fruit, it is one of the best fresh cherry desserts. You can use frozen cherries too!

Known for it's rustic appearance, a crostata recipe involves folding pastry dough around the edges of a filling. No pie tin needed!

I love a good rustic pie and have a few crostata recipes you'll want to try:

With a flavorful almond base and sweet cherries on top, this cherry crostata is the bomb. This is the way to eat cherry pie!

Buttery pastry crust, an anise-flavored almond frangipane and juicy fruit. Holy smokes this is an exceptional dessert. Great for the summer fruit season or the holidays and Thanksgiving.

Cherries are such a delicious fruit and have endless possibilities for desserts. One thing I love is that cherries bake into desserts so well fresh or frozen.

What to make with cherries:

In this cherry crostata recipe, I use sweet cherries. Typically in season during the summer months of June and July, fresh sweet cherries are juicy, yet not too juicy to bake with.

The genius thing about my single layer cherry crostata is that frozen sweet cherries are perfect to use, making it easy to bake this rustic pie any time of year. Thanksgiving is an ideal time!

You may have heard the terms crostata, galette, and tart used for recipes that look almost the same. The truth is, a galette and crostata are essentially the same thing. Crostata is an Italian term and Galette is a French term. Both refer to a rustic pie or free-form pie.

A tart can be sans pan or baked in a pan. It's really not the same thing as a crostata or galette, but occasionally the term can be used.

This recipe could totally be called a cherry galette because I use a filling with a French name! Frangipane, an almond custard cream, is originally from French roots, but now there are a variety of desserts that us it, so I felt I could be a little free with it.

Almonds, butter, sugar and eggs come together to make an irresistible filling for baked tarts, pies and even cookies.

Frangipane, a French term, uses ground almonds (not almond flour) and sugar to create a sweet filling. The almonds are not toasted, so the flavor is very mild.

Butter and eggs are added to make a paste-like cream that bakes into a sugary custard. It's truly amazing.

I added anise seeds to mine and I think that's the only way I'll ever make the frangipane, ever!

How to make crostata dough

Crostata dough is pastry. You can make a butter pastry like a pate brisee, or an American pie pastry crust that includes shortening. I love my basic pie crust recipe, it's perfect for this rustic cherry crostata.

Use your favorite pie dough as the crust for this cherry crostata. Yes! You can even use a circle of store-bought, prepared pie dough. Although I don't suggest it, the flavor just isn't the same.

How to make the crostata

• Make the crust: Simply cut cold butter into a mixture of flour, a little salt and a bit of sugar.

• Stir in water until the dough comes together. Wrap and chill, then roll out into a circle.

• Cover the center of the circle with frangipane filling, and top with cherries.

• Fold the edges of the crust over and bake until golden brown. 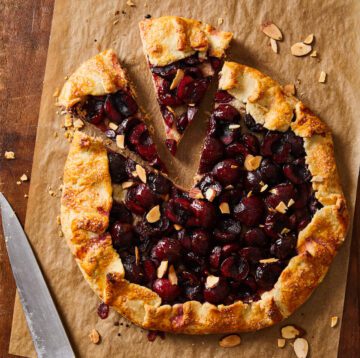 This recipe is an exclusive recipe from the cookbook Live Life Deliciously, by Tara Teaspoon.