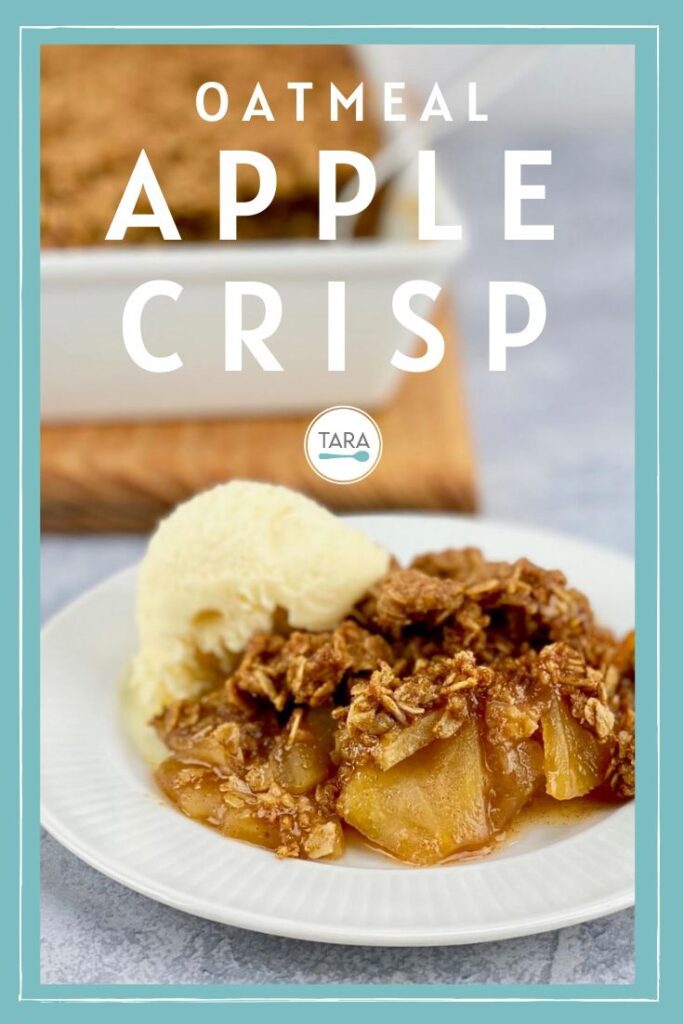 The only apple crisp recipe you'll ever need! The buttery oat topping is baked on top of juicy apples and creates absolute bliss. Top this apple oatmeal crisp with ice cream and you'll have everything you've dreamed of in a baked apple crisp dessert!

When I'm at home visiting family, Mom always requests that I make my apple crisp. I never measure the ingredients.

I just assemble the recipe by taste and feel. She watches and writes down approximations, but the notes get lost and it is requested again.

I have finally written it down for the record! You may just want to keep this bookmarked too! It's truly the best apple crisp recipe. If you close your eyes, you can smell the deliciousness wafting through your house!

This recipe has the same crispy and sweet oat topping that my rhubarb crisp recipe has. I simply left out the cinnamon to pair it with the rhubarb.

Developed and improved on over the years, this recipe touts my favorite balance between soft apple filling and oat crisp topping.

I mean, who wants a bite of just apples, after you've devoured all the cookie-like topping? This apple crisp recipe has the perfect ratio of topping to apples. Plus the crispy oats on top are my secret weapon of divinity!!

This sweet oatmeal apple crisp recipe is perfect, with a buttery topping, a touch of cinnamon, and soft-cooked apples. It's classic topped with ice cream.

What Makes This the Best Apple Crisp?

I have a list of tasty reasons why this is the best apple crisp with oat topping. Sure, you can just mix oats, sugar, cinnamon, and butter and get a fruit crisp topping. However, for perfection, I think there should be a little more to it!

I like my oat crisp topping to be a treat in and of itself! That means making it a little more like those oatmeal cookies I love. While still keeping the simplicity of a crisp topping.

The perfect apple crisp topping should be:

Ingredients in Apple Crisp with Oats

I don't use store-bought apple pie filling for this dessert. Instead, I mix my apples with cornstarch, lemon, and spices to make my own, quick-cooking apple filling. It bakes perfectly under the oat topping and the crumble doesn't get soggy.

The oat crisp topping is like your favorite oatmeal cookie and is super easy to make. If you can believe it, some apple crisp recipes don’t use oats. The recipe simply has a sugary cookie crumble on top. No thanks!

I achieved what I think is perfection by making my apple crisp topping as I would oatmeal cookies. I don't add eggs and it's more oats than flour, so it remains a true crisp, with cookie attributes.

Rolled oats are the base and brown sugar and cinnamon are added as classic flavors. I add a little flour. I also add a bit of baking soda to help create a cookie-crisp bite. That little bit of leavening is just what the crisp needs to not be super dense.

The butter is generous. I use 1 ½ sticks in the topping. Along with 2 tablespoons of milk, it's the moisture for the mix.

How to Make Apple Crisp with Oats

Making the apple crisp with oatmeal topping is so simple! The topping gets mixed together first. You'll need to use your hands to incorporate the butter fully.

For the apple filling, toss together the apple slices, lemon juice, cinnamon, brown sugar, and cornstarch. Transfer to a 9x13-inch baking dish and sprinkle with the oat topping.

Bake the apple oatmeal crisp until the top is browned and the apples are tender and bubbling.

This cookie-like fruit crisp topping is divine on top of baked apple filling. It's also delicious on other fruit crisps.

Get creative and use the apple crisp topping however you'd like!

Can This Recipe Be Made Gluten-Free?

This is the perfect gluten-free apple crisp recipe! The GF version tastes exactly like the original. So, if you are baking for a mixed-diet crowd, this is the dessert to make!

I always use Cup4Cup in my gluten-free baking and cooking. You can swap the regular all-purpose flour for equal parts Cup4Cup GF all-purpose flour, and follow the method for the recipe as is.

Please make sure you use GF oats if you are feeding someone with celiac.

What Are the Best Apples for Apple Crisp?

The apples to choose for apple crisp is really up to you. I'll tell you that apples have different textures and flavors, so you'll want to decide what you like.

When I make my Salted Caramel Apple Pie, I use a mix of apples. Macintosh and Empire are geniuses for baked desserts. They are sweet and break down into soft bites when cooked. Almost melting in your mouth.

Other apples like Golden Delicious, Pink Lady, and even Granny Smith are great in the mix for sturdy texture and tartness. They stand up to cooking, holding their shape and toothsome juiciness.

Play around with your own mix. You can't go wrong with a variety. Then, you'll have all the tastes and textures in every bite.

Tips for Making This Recipe

You may want to peel your apples as I do, so you can use a vegetable peeler or my favorite apple peeler.

You'll want a large mixing bowl for both the crisp topping and the apples.

I love these measuring spoons because they fit in spice jars with ease. 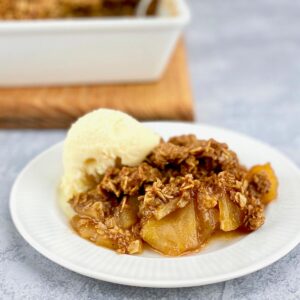 You can peel the apples like I do, or leave the skins on if that's your preference.   Make a mixed berry crisp with this topping. You can try the filling I use for my Razzleberry Pie.

Other fruit crisps from around the web that I like:

Kitchen tools for this dessert: