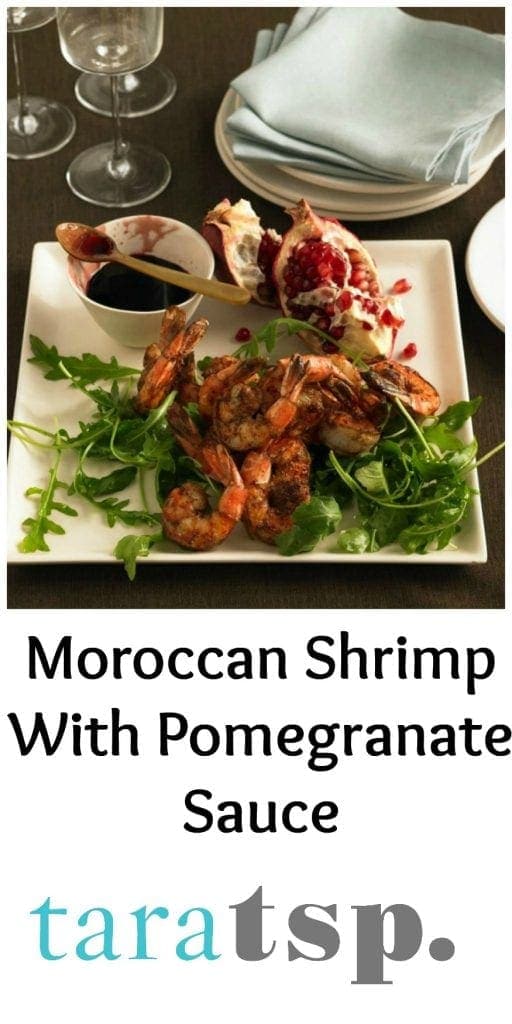 Spiced shrimp and gloriously rich red pomegranate sauce make even the most regular of parties glam!

I'm getting ready for a Golden Globes viewing party this weekend and decided I wanted even the food to be celeb-worthy. I've decided on a mix of apps, snacks and treats. Stay tuned the next few days for the full menu.

Shrimp as appetizers is kind of the perfect food. It's usually one to two bites, you can flavor it a million different ways, and it can be served hot or not. With Moroccan spices it pairs well with a lemony, caramely pomegranate sauce.

Pomegranate molasses is a hidden treasure. In it's simplest form it is just reduced pomegranate juice. You can purchase it at Middle Eastern markets, but it's often hard to find, so I like to make my own.

I use it for steak and poultry sauces, vinaigrette, drizzling on roasted vegetables and swizzling into mixed drinks. It adds a bright, tangy and rich sweet flavor. When I make my own I don't bother juicing my own pomegranates, that's just messy! I use pomegranate juice from the grocery! I also add a little sugar and lemon to balance the flavors and help my molasses last longer in the fridge.

It ends up being the most extraordinary dipping sauce for my Moroccan shrimp. This is such a classy dish and great for apps while entertaining, but with salad and some crusty bread, makes a great weeknight meal as well. I piled my little apps of shrimp on top of arugula for my party platter, but that's just a pretty option.

Pomegranate molasses is a hidden treasure. In it's simplest form it is just reduced pomegranate juice. You can purchase it at Middle Eastern markets, but it's often hard to find, so I like to make my own.

Calories: 45kcalFat: 1g
Want to watch videos to show you how to cook?Check out our Youtube and try this recipe and more.